In to the void. Two days with the Oculus Rift.

I have been spending two days now with the Oculus Rift and I have had a lot of fun. It have been nothing of what I did expect. For good and worse. After some experimenting I finally got it going. Not to difficult. Of course I use DK2 so not much software are ready to use. It is very new.

I have been testing games and of course Second life. And I have to say SL looks better in real immersive 3D. The Oculus screen is still to low resolution but you get the idea where virtual worlds are going in the future. I thought that rides and big landscapes would be the best but I was so wrong. Rides gets me motion sickness. When to may things move the brain just cant take it. Big landscapes do not translate very well to 3D. No it’s the small areas, houses and glades that really work the best. 3D art looks great. There is a new art form coming now me think.

And of course the avatars. That’s the best of it all. Wow what cool avatars there are out there in SL land. When you see them in the Oculus there is a big difference from the ordinary computer screen. I just had to check out the adult areas and whhooohhooo HOT stuff. Guess why many people will buy this thing.

What I would like to have in SL is a nice café where you can sit and look at people passing buy. Just like RL.

The Oculus Rift is a big thing. I did some testing of some old games but size and gameplay are really off. I had a lot of fun with Half life 2 though. It updates so fast that I did not get any motion sickness. It is still a problem but maybe DK2 will fix that.

Cant wait to visit some more places. My city on the OSgrid when it come up again and many more. Virtual worlds feels fresh again.

I find it somewhat strange when talented artists live in SL as secret. But it is also refreshing. I read about Mr. Godard at New world Notes and decided to find Mr. Godard in SL but there are almost no information on the profile and not many traces in SL.

The photos are very good and I found another fav photographer in world.

First months with the simulator 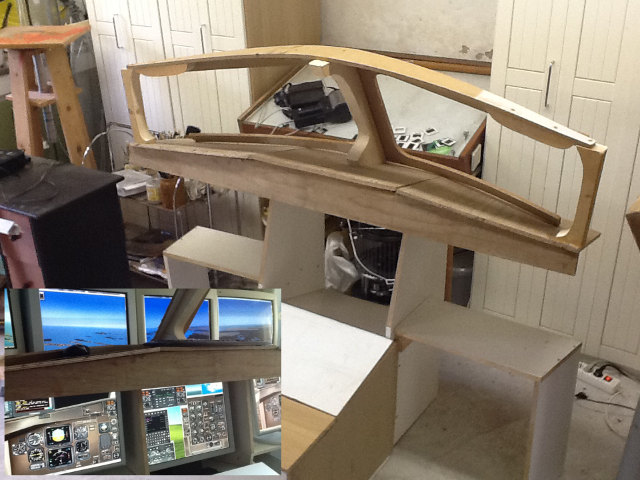 I started this simulator build some months ago and started with building a very basic setup. I wanted to use the simulator to fly on Vatsim and also do tests as my knowledge of simulator builds are basic none at all.

Now the simulator is back in my artlab for another phase of building. Just using it have increased my know how in sim building a lot.

I started out with measurements for a Airbus 320. But i fly the Flight 1 ATR72 so i soon found that it did not really work. I do my flying with an old broken joystick and a store joystick is not sensitive enough for sim flying. My landings for my VA, not so good statistics. So the Airbus is out. I have been studying hundreds of different cockpits and they are all different, even the same plane can have much different cockpits. But the basic function is the same. There are instruments, radio, navigation and engines.

I have a very small gaming company and i want to test all kinds of planes and simulators. So i want to build a multi purpose simulator. I want to one day fly the ATR and maybe a Boeing the next.

So this is what i have learned about simulator building.

Side walls. At first i did not care about them. Maybe wanted to skip them. But no they are more important than i could imagine. Because of maps and other stuff. I have had the maps in the room but that’s not very real. When the controller want me to fly BABAP 3C and i go over to the book shelves and get the maps. No book shelves in planes. I have now bought a small Android pad that i will put in the cockpit for the maps. I see that they have that in planes today. You can buy one for almost nothing today. It is useless for most things but works OK for maps. I have my Ipad for checking facebook while flying.

I will put in side walls for added realism.

Computers and wiring. The simulator runs with 3 computers. At first i just put them anywhere and that was not a good thing. Computers need upgrades wiring needs to be replaced and it was a big job every time anything needed replacement. I had to climb in and under the simulator and i have it in a very small room so to much work. I have built a lot of computers and a few big ones so i should have learned that some structure really pays off in the end. So all computers in one place. Wires marked and off the floor.

Outside views. Not as important as you would think. 80% of flying a airliner is looking at the instruments. It is very nice to have when you are taxiing on a nice scenery airport. But at FL250 not that important. And i am using FS2004 for the most of my flying. There are a lot of free scenery. I have to put it on three computers so i am not that happy about buying things. It updates really good. Smooth flying. I also own 3 copies of FSX. (did i say i have a small gaming company? No i do not use pirated software. I cant expect people to buy my stuff and then not do the same.) My computers are not the most powerful in the world so FSX got terrible update times. It looks great but i only use it for VFR flying in my Cessna. The upside is that i can see all other Vatsim traffic on all monitors thru Widetraffic. Buying more powerful computer are a project for the future. I am on a simulator budget.

Pedals, throttle and joysticks. I am going to build my own system. You need all of them for flying and i have found that you really need some sensitive stuff to make it work. My simulator is a two seater so i need a double command. At art school i did some classes in welding, those will come in handy know. I have to do further testing. Hope to come up with something good.

The overhead panel. This a problem still unsolved. It is useful. But not for the price of a touch screen and i really want buttons and gadgets. I think i will build one and the put in the different modules as i expand the simulator. I have seen that you can buy one ready made. But i want to build stuff so i will get back to this one later.

Building a simulator is a big job. And it is growing all the time. But i find the studying and learning new things really fun and relaxing. For me making art and game projects are work. Sometimes complicated and difficult. So when i want a break from it all i just go and “SAS332 request clearance for Gothenburg with information Victor.” it is as good a hobby as anything.