I have been exploring the metaverse to find cool clubs and really nothing. Send me some info on your favourite to

It is not often i find a mall build i like. They are often terrible. But this one got one of my best rules. It should be fun to walk around and explore.

And someone been thinking about the stores to. Not just a lot of pictures stacked on top of each other.

And there are also some nice places to sit and take a break. 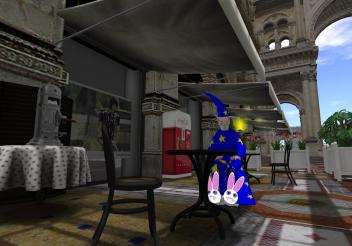 Taking a break and waiting for my espresso.

This is Nilsart gallery in Second life. It is a nice build and I like it. Now I wanted to test if I could transfer it to Cloud party. First I moved it to my developer grid. It runs Opensim. No problem there. Still looks nice.

Then I exported it with the Singularity viewer to a dae file and imported it in to Blender. Did a heavy reduction of faces and uploaded it to Cloud party. On the left it is in Cloud party. Here I stumbled on the finishing line as Cloud party did not let me place it. The mesh was still to big. But it is possible to do it.

Next to solve is textures. I check that out later.

A fast hypergrid trip to Francogrid.

First: Love the hypergrid and I did not lose my shoes this time. Why do you lose the shoes and not the hair? Metaverse riddle.

Nice place and I just super like the fishing boats far in the distance. That is a kind of focusing at detail I like as a builder. It is a French grid but nobody tried to talk to me. Me and my French teacher long ago, agreed I probably will never learn it. Worth a trip.

So the conference is over.After listening to cute stuff, tech stuff and mind blowing stuff. What to bring home?

The conference itself? It is not the same to be there as it is listening to a stream. You can comment, wooot things and generally be there. The feeling is different and that’s a good thing. Virtual world actually works. At lest for me and as we heard for about 40% of the rest of the population.

A side from the tech stuff we also have another thing in common. English. We can talk and listen to each other. English is not my first language so I do not care if I sometimes make a few mistakes. I can communicate. That’s the thing.

The tech stuff worked aside from some small glitches but who have been to a conference without tech problems. It is a part of the package, it is ok when people are nice about it and everybody been really nice.

I wanted to listen to as much as I could. I heard about the business side, learning, tech, simulating cities and military. Some more philosophical talks on why we use the metaverse (yes I used that word). But I missed my special interest . Art. Maybe I have to do that one myself for another year.

I liked that many talks was nice to Second life. There is really no competition. I think Second life and Opensim are different sides on the same coin. But Linden lab is a company and need a good business idea, As many Opensim grid owners, money is needed to run the worlds we visit. But I wonder if Linden lab and Second life will be around in 10 years. I think Opensim will. I visited Active worlds some time ago, First time I visited I used a modem and the internet was just starting up. It shows that the Open source idea could help software to survive and evolve. There may be another conference in 10 years.

Never heard a thing about Cloud party. I think people from Cloud party and Linden lab should be invited would be interesting to hear what they have to say. But maybe they do not want to.

There was a lot of talk about the Hypergrid and of course the Hypergrid I seriously cool. This is a game changer. I want to own my stuff on my computer not I some other peoples servers. I think I have to put some of the dev grid on the Hypergrid. Thinking.

So in the true spirit of the Hypergrid I went over to the OSgrid for some official after party. Listened to live music and chatting away.People where coming and going and someone said that we where 36 at most moving around, dancing and no chat lag. Just had to ask. We were running on a 4 core Windows server, with 2 gb of ram I think. I do not really remember because it was getting late and I am a old person.

So the impression that stands out is that it really worked well. Maybe it is time to go to Beta. LOL.

We joined in from all over the world under a common interest and made it something to really remember.

I visited the grid today and I realized I have nothing to wear to the dance. I have a lot of cool clothes on the Second life grid but they cant be moved so I have to do some uploads of some old clothes I made years ago. Naked is not an option.

I still think that we should be able to use the things we have bought on any grid. I want to own my avatar everywhere in any virtual world and the stuff I have paid for. There got to be a solution of rights. I want a bigger hyper grid! 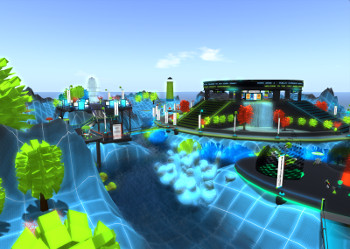 We are coming up to the weekend of the

I have been visiting the grid a few times now and everything look really good.

Yesterdays load test also worked ok. Many avatars and the chat did not break. 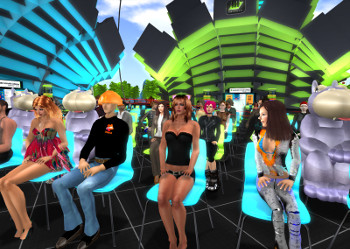 Me and all the other guys. I wanted more hippoes, but not.

Starting to look forward to it.