Linux the way forward for gaming.

Today I was reading about how Microsoft are moving in the same direction as Apple and build a more closed system for Windows 8. I can see how this is the way forward for the big software company´s. More control and more money.

It is a great opportunity for Linux to be a new standard for indie game developing. I have been running a cluster of Linux machines now for for more than fifteen years. It is stable and today it works good and Linden lab have showed us that you can make a complicated game software that work on Linux: The Second life viewer works better on my OpenSUSE workstation. (Not last week someone f.. up.)

But there is a but as always.

We need some standards. Library´s and a better way to update the drives for the graphic cards. But that is it. And it would be possible to create a distribution that could work as gaming platform. Steam is on Linux but of course not many games run on Linux. Maybe steam could create a gaming platform or maybe Google. Android for the PC.

I use Windows. I still use Windows XP because I have some great developing tools that only work on the XP. I have a Xbox and a Ipad. I run Vista and 7 to.

They are all great tools for creating games and virtual worlds.

But I want a new system. Linux that work with games and make me free to run whatever I want not a big global corporation. I do not believe big company´s are my friend´s they just want my money. Maybe there is someone out there that want to get rich on making the first really good Linux gaming system.

I think I want to put in some life forms in my Lendonia build. I have been working a lot as a artist with chaos and dynamic software. And maybe it is time to put these things together. I have been thinking for some time now about the possibilities to put some kind of DNA solution for expanding life forms.

Something like the cat and horse breeding in Second life. This is very exciting. I have been doing some hardware work on my server and still have to change another motherboard tomorrow but then it is back to creating again.

Ohh the picture is from Mandelbulber. Great software.

How would i ever find new artists? 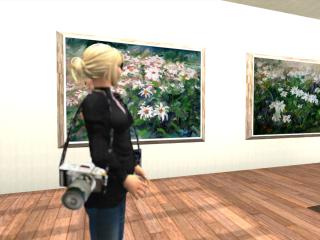 At the Two Shores gallery annex http://maps.secondlife.com/ secondlife/Magna%20Carta/207/ 19/31 i found Xirana Oximoxi. The flower paintings a really good and a nice thing to go and see. I really happy about the opportunity to walk around Second life to find new artists.

Airport almost ready and Portal to Ghost town up in Lendonia.

I have had some problems converting some old .x files to useful graphics but finally Sunday evening I got some luck. So the airport is almost ready.

It looks really good. You cant rally fly but maybe for some Machinima purpose.

And a new portal and some trees in Lendonia.

Opensim is really nice to build in. I really hope I or somebody else find it useful. Opensim is a nice piece of software.

My airport is growing nicely.

Today I have put in lights and runway signs. And the main entrance hall and arrival area looks good. A hangar and some other buildings.

Tried to us a old mesh of B747 but the format was to old and I did not find a converter that worked. I have to make a new one or some other plane. And yes have to try out a flight script in LSL sooner or later.

It is nice to work on my Opensim grid. I am alone but I have a lot of space to work in. Now it is TGIF.

Lendonia in the Woods looking up on the mountain.

The work continues. Put out some trees and ground cover. Now I see how big this area really are.

My new build is a Opensim airport. I have been building airports for Flight simulator and now I wanted to build something for Opensim too. Now when I a ready with 2worlds city I needed a new project.

I do not know if flight scripts work in Opensim but know I have to  try out some of my old Second life ones. Need to do a lot more textures. But that is just fun so hope to get this thing online in a while.

The first picture of Lendonia

My 9 island build is on its way. After some database fiddeling I got the ground textures in place. It looks nice and now it is time to transfer some builds from Second life. I have a city gate and some other stuff. I am going to do some new builds and I have already created trees to the woods. This build will be a primary mesh build. I want to reuse my stuff in games.

A new railroad on the Devgrid Island.

I have put in some tracks on the dev island, There is no script that can follow them yet but maybe it is coming. Now the Opensim Island Worlds2 city is ready I just have to make some video and pictures. Then it is packing in a OAR file.

I will put it up on the OSgrid where we have a new place on the map. The old one was stolen by some Japanese guys who needed some more room. Well that’s the open grid. I have put it far away now. Search for 2worlds2go.

I am going to put the OAR up on http://cybworld.org .